LALEHAM ARCHERY CLUB'S FIRST GONFALON was made by Dawn Gillies, one of the Club’s earliest members, either in late 1957 or early 1958 when the Club was based at Matthew Arnold School, Staines. The Club proudly sported this gonfalon, which was a classic gold-coloured centaur on a green background, for many years at both home and away tournaments. It lasted through two moves which saw the Club change homes to Laleham Golf Club (1959-1964) and then to Staines Football Club (1964-1971).

In 1971, when the Club eventually moved to its present home in Worple Road, Staines, there was the suggestion that perhaps the Club should sport a new, more modern gonfalon. Ken Potts, one of Dawn’s contemporaries and a senior member of the Club, suggested that the design originally used for the first gonfalon was probably too complicated and over-detailed to allow easy reproduction into either a new gonfalon or small cloth badges. The Club looked around for a bit of inspiration, eventually identifying an image of the Air India logo, a stylised version of the centaur facing to the right.

The Air India logo from which the LAC centaur was derived.

The image symbolised movement and speed, and represented Sagittarius in the act of shooting an arrow. That was all that was needed – within a short space of time the image was reversed so that the centaur faced to the left and was then neatly incorporated into the new logo that Ken Potts' wife, Ann, fabricated.

This particular gonfalon saw a huge amount of active service, being taken to many of the tournaments contested during the twenty five year period from 1971 to around the mid-1990’s, having also travelled to Malta in 1980/1, for the International Double FITA event there. For some reason, in the 1990’s it fell out of use, being unceremoniously dumped into a box at the back of the storage shed, where it was totally forgotten. At some point, during 2005, it was “rediscovered” during a sort out, but had become so badly crumpled and faded that it was not possible to restore it to its former condition. After some tender loving care, this gonfalon is now permanently displayed in the cabinet in the SALSAL bar. 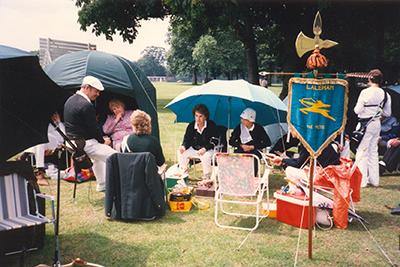 June 1987 - Laleham Archers having lunch at a shoot at Windsor with second gonfalon in foreground - photo courtesy Bill Raggett. 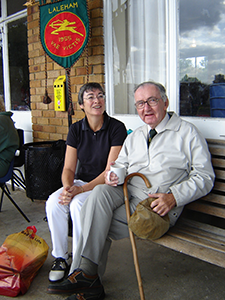 During 2005, Dot Smither, the wife of the then Club Chairman, was commissioned to create a new gonfalon for the Club’s 50th Anniversary celebrations, which, coincidentally were also in 2005. The new gonfalon still incorporates the stylised image of Sagittarius, but, as can be seen from the photograph, is now much bolder in terms of the colours it uses.

Definition: “A gonfalon is a long banner or flag, often pointed or swallow tailed, occasionally with several streamers, and which is suspended from a crosspiece. Gonfalons were first adopted by mediaeval Italian communes, being designed with either a badge or coat of arms, and often further embellished with fancy designs.”