Vae Victis - The Book of the Club

In 2008, Roy Smither, who was Chairman of the Club at the time, published a book about Laleham Archery Club, and he has been kind enough to allow us to upload it to our website. 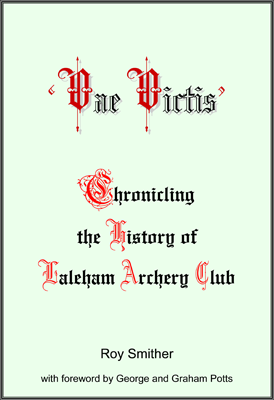 In essence, Roy's incentive to write this book was driven by several things, which seemed to occur more-or-less simultaneously in 2005. The first was seeing a book produced by Laleham Golf Club to mark their centenary year in 2003, and which several LAC Club members were given the opportunity to browse. The authors of this book had had 100 years’ worth of uninterrupted committee meeting minutes to trawl through as evidence – a veritable goldmine. The fact that LAC had its second home temporarily at Laleham Golf Club also contributed to Roy's wish to uncover more about our Club’s history. The second thing was the fact that 2005 was LAC's 50th anniversary year, and what better way to mark the occasion than to compile all those tales and facts that Roy had learnt into a complete record of our Club.

At this time in 2005, Roy also became aware of the death of Stan Hewitt, the Club's founder, just as the Club was poised to invite him and his wife, Peggy, to present the prizes for the inaugural, celebratory full FITA event to be held in May that year – an ill-fated irony, but also a spur to do something in Stan’s memory!

Roy had learnt quite a lot about some of the earlier history of the Club from Keith Bence, a former Chairman, mainly during the bar sessions on a Friday evening – including titbits about Lew Smith, the designer and manufacturer of the Laleham Bows, as well as about those superb archers who had represented Great Britain at the Olympic Games. All this whetted Roy’s appetite, for there is something exceptionally positive about putting pen to paper to create a record about this minority sport of ours, and in particular, about our own Club

Roy's book has been converted to a pdf file and is available to download: